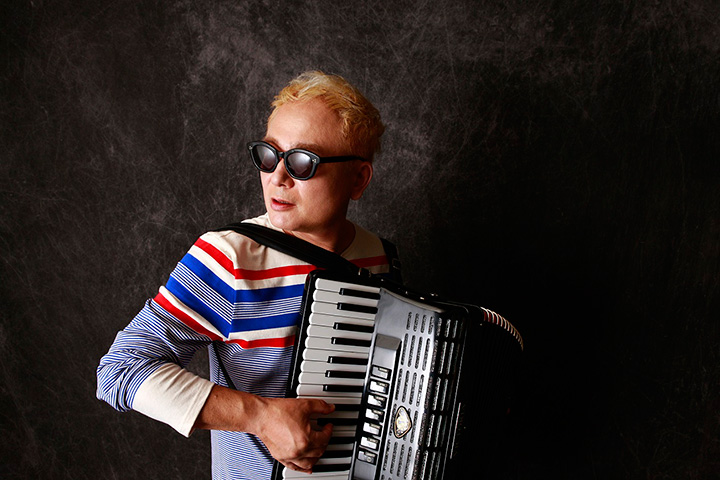 Accordionist and composer
Wins numerous international competitions. Since then, CD releases in Europe and the No. 1 chart have made the name and music of "coba" continue to influence the world music scene across borders.
The tour has been renowned throughout the world as a leading artist in Japan, including European tours that have become a norm for over 20 years, and participation in world tours offered by Icelandic diva Bjork.
The work that always pursues high-quality sound has gained a high reputation both at home and abroad.
It is said that the music that changed the image of accordion in the world of pop music has become a music genre called "coba".
At the Vancouver Olympic men's figure skating, Daisuke Takahashi won the medal with coba's “eye”, and Asuka Teramoto used the “door of time” at the London Olympics.
Over two seasons in winter and summer, coba's music set a monument on the world stage.
In addition, the film, stage, TV, and CM music that have been produced to date have exceeded 500 works. He has also produced many works as a composer, including works commissioned to performers and orchestras.
On December 21st, the 25th anniversary of their debut in November 2016, the 37th original album “coba?” Was released. A national tour “coba tour 2017 25th Anniversary” has been held since January 2017.

Started accordion from the age of four.

After graduating from high school, went to France.

Since there was no school to learn accordion in Japan, I studied in Paris for two years.
To learn more in earnest, go to an accordion vocational school in the Obernew region.
In the village where 50 out of 300 people are accordionists, spend 2 years in an environment where only accordion can face nature. While in school, he won the first place in the French competition in various departments. As a Japanese accordionist in France, he has a big topic.

After returning to Japan, he released albums focusing on French dance music “Musette” and “Chanson” and started concert activities. During the concert activities, there were many encounters and discoveries, reaffirming that the accordion bellows is close to human breathing and emotional expression.

Entrust your accordion with your original feelings.

He started writing originals and released an ensemble album "Hidamari" (2004) with 11 artists, and an accordion complete solo album "Solo" (2007).
In 2009, Kanako Kanato arrived at a theme centered on the original song “Namida”, which is not a classic skill nor French music.

The goal is to continue playing the accordion even after the age of 80. 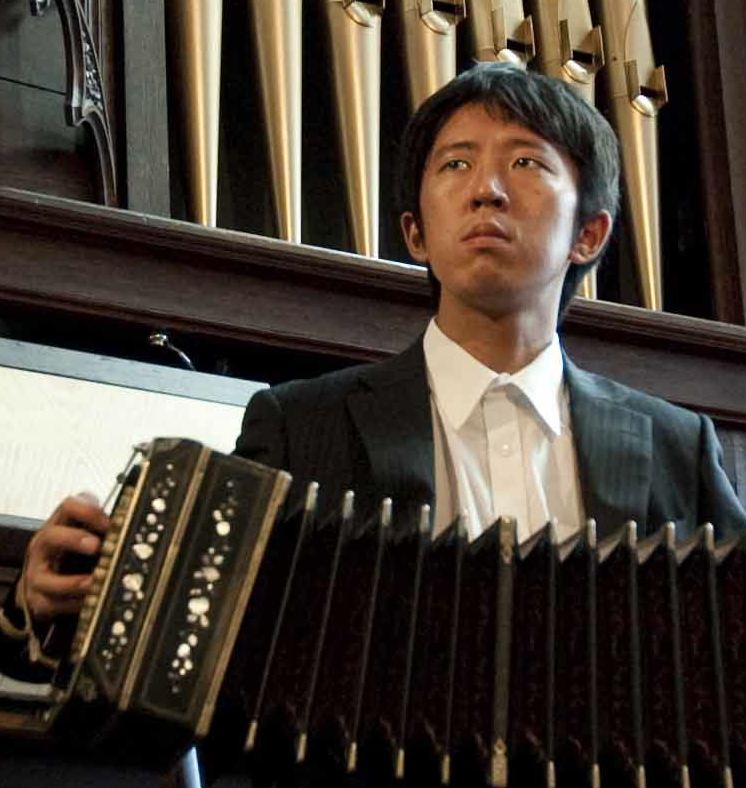 Born in Kaga City, Ishikawa Prefecture. In 2004, graduated from Saitama University with a major in music composition. Japan's first classical music bandoneon player. He presides over La musica Es.
After studying bandoneon with Ryota Komatsu, he moved to Buenos Aires, Argentina from February to March 2002 and from March 2004 to January 2006, and became the first classical music bandoneon player and composer in music history. Studied under the late Alejandro Barletta (1925-2008), and under the late Rene Marino Libero (1935-2010), who was also a disciple of Barletta in Montevideo, Uruguay.
During her study in Buenos Aires, she performed at numerous concerts and held recitals at Casa de la Cultura en Adrogue, Casa de la Cultura en Buenos Aires, and Museo de Fernandez Blanco. He also appeared as a Japanese classical band neon player on a radio station program on the Argentine nationwide network. Get an interview.
*
Primarily performing bandoneon solo, perform recitals at concert halls, churches, etc., and premiere Japan's works by Barletta and Ribero. In addition, accompaniment with a single bandoneon, to date accompaniment of flute, saxophone, violin, cello, oboe, soprano, vocal ensemble, reading. 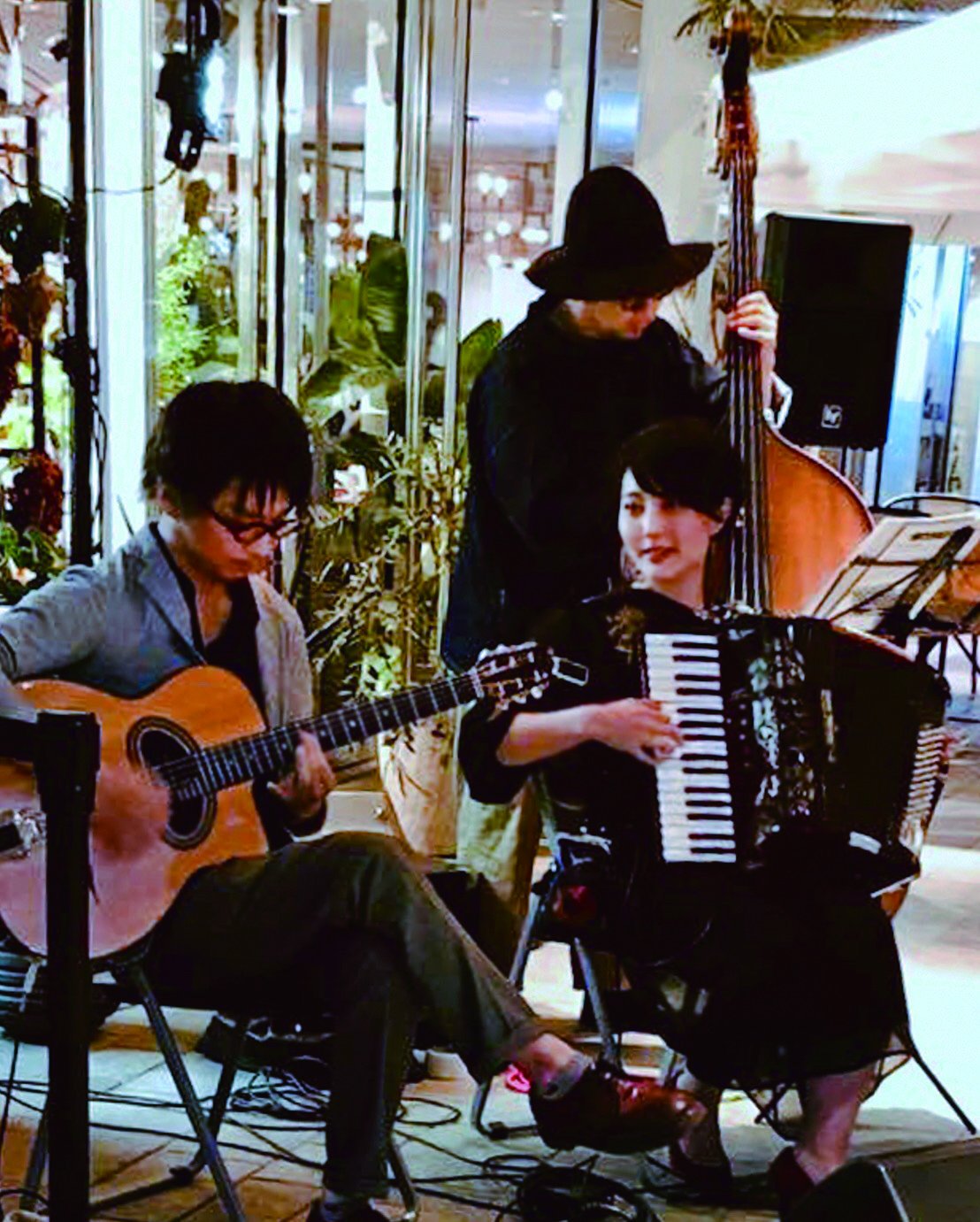 Unit of Accordion Kyoko Hayashibara and E. Bass Yoshikazu.
Since it was formed in 2004, it has been active in cafe live and events mainly in Kansai.
Accordion + electric bass =?・ ・ Playing from there is the scenery over the sky, the bottom of the sea, the other side of the earth, the melting sun on the red sunset, and the scenery of some days I want to see somewhere.
We would be happy if you touched POPOGI and made a trip with such a sound. .